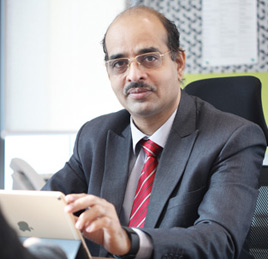 Prakash joined NSDC in October 2016 and has been credited with developing innovative capability and Self-sustaining model for the organization.

With over 25 years of progressive experience in finance management, he has held senior executive positions in some of India’s leading corporates, where he led scaling up systems and processes in implementing financial controls, productivity improvements and change management.

Prakash is a qualified Chartered Accountant, has earned an e-MBA from SPJIMR and has pursued a leadership program from IIM-Bangalore.  In 2010, he was awarded prestigious ‘CFO of the Year Award’ for Excellence in Finance in a Start Up and received ‘CFO-100 Roll of Honor’for five years - 2011, 2012, 2015, 2016 and 2017.