Differently-abled Laxmi Writes Her Own Destiny 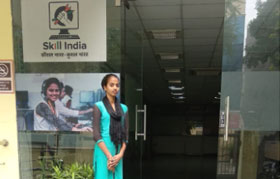 All the world is full of suffering, it is also full of the overcoming of it, ~Helen Keller¸ American author, political activist, and lecturer.

This is the story of Laxmi, who was once a shy and timid girl. Today, her confidence and energy has the power to transpose you to a mightier place. Laxmi’s family comprises five members with her father being the only earning member.It doesn’t come as a surprise that financial challenges plagued the family, especially since living in a metro city is expensive, even if one has to just meet the basic requirements of day to day survival.

For Laxmi, the goal was to begin her earning career as early as possible, so that she could contribute to her family’s income. However, in today’s competitive world, a class XII pass-out has few options as far as productive and sustainable employment is concerned. Besides this, Laxmi is also differently-abled, with 60% paralysis in her left leg. But as someone who doesn’t give up easily, the young girl did not lament about the challenges, but rather made them the stepping stones for her success story.

Laxmi shares, "After completing my class XII,I decided to quit studies and look for a job.A job, which would not only help me build a career but also help me support my family. However, it was not easy. One day, I came to know about the Pradhan Mantri Kaushal Vikas Yojana. I visited IL&FS training center in Okhla to gain more information about the various training programs and the future job prospects. I undertook counseling but was still unsure about which trade I should choose, especiallysince I am differently-abled. I then got to know about the certificate program course for a customer care executive; I immediately took admission."

Her training at the PMKVY training center helped her not only understand the nuances of the skill, but also developed her personality. She thanks the trainers for building that confidence and passion in her.Post her training,she was placed with SMC Insurance Broker Pvt. Ltd. in Noida as a sales executive. This was her first job. After working for six months with the organization, she decided to join another company where she continues to work till date. Not only are her trainers full of praise for Laxmi, but also her employers.Though she belongs to a disadvantaged section of society, her dedication and perseverance motivated her to transform her dreams into reality.

Laxmi is a living example of an individual who believes in herself, makes the most of each situation and remains focused on her goals in life, letting nothing, absolutely nothing, deter her from her path. As Benjamin Disraeli, former Prime Minister of the United Kingdom, once said that there is no education like adversity; this finds resonance with almost all achievers in life, who have not only turned their lives around for the better, but have become a beacon of hope for those, who have given up hope.